Much has been written already about premodern roads on this blog. However, the Viabundus dataset also contains a second important mode of transportation: inland waterways. This series of blogposts will shed a light on the peculiarities of transport over water in premodern times, and focus on the human interventions in the waterways in the form of dams, locks and canal construction. This first part is concerned with natural waterways. 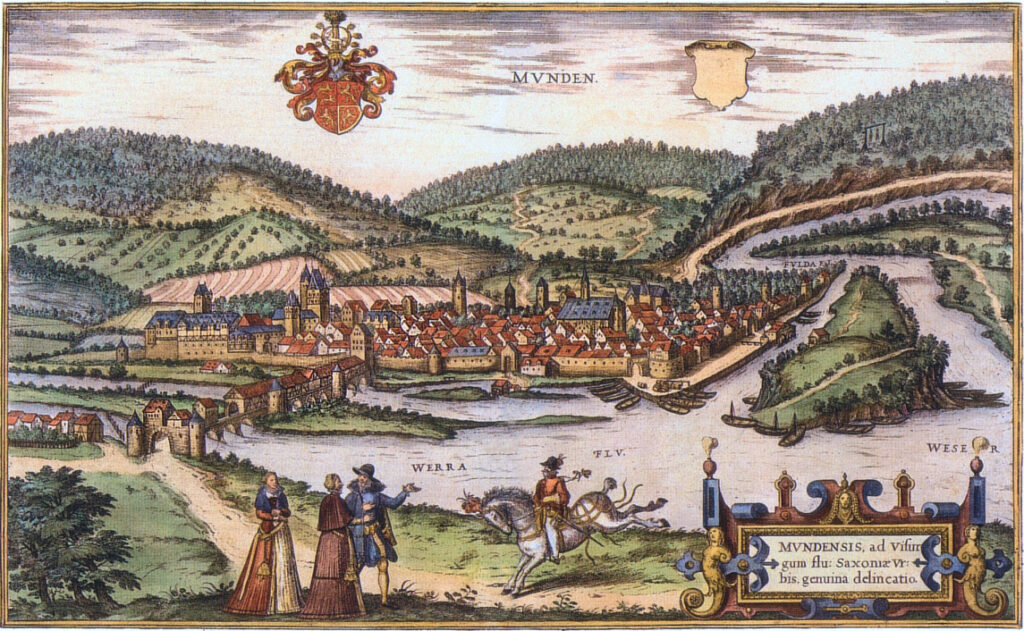 View of Hann. Münden by Franz Hogenberg (1584). The town was an important staple market, where commodities were transshipped between vessels sailing on the Weser, Fulda and Werra rivers.

Until far in the Early Modern period, waterways were preferred over land routes for a number of reasons: they required less maintenance, were less cost-intensive, quicker (at least downstream) and they were easier for transporting heavy bulk goods in large quantities (e.g., grain, stones, or wood). James Masschaele has calculated on the basis of English sheriff records, that land transport in medieval England was two times more expensive than river transport.

Particularly in coastal lowland areas, transport over water was therefore preferred over land transport until the 19th century. The natural circumstances in such regions, such as the many rivers and lakes and slow flow velocities, facilitated water transport, whereas land roads were difficult to use due to the wet soils and many water crossings. In some marshy areas, such as the principality of Novgorod and other parts of Russia, many roads could only be used by heavy traffic in winter, when the soil was frozen, and a large network of natural waterways permitted transportation of cargoes between the Baltic Sea and the Black Sea, which was already in use in Viking times.

In less marshy and more hilly areas, large rivers such as the Rhine, Elbe and Vistula also permitted the use of natural waterways in regions located far inland. It is no coincidence that many large cities were located on natural waterways, and important trading towns such as Antwerp, Hamburg, Gdańsk (Danzig) and Riga developed at the mouths of large rivers, where cargoes had to be transshipped between large sea-going and smaller river vessels, or between land and water transport.

Navigation could take many forms: on large bodies of water, sailing was possible, and ships could be floated downstream using the current, often with the help of a sail for additional propulsion. Upstream and on small rivers with low flow velocities, navigation was much more troublesome. Here vessels were usually towed by horses or (wo)men. Not only did this cause much slower travel speeds, but it also depended on clear accessible river shores along the entire length of the route. 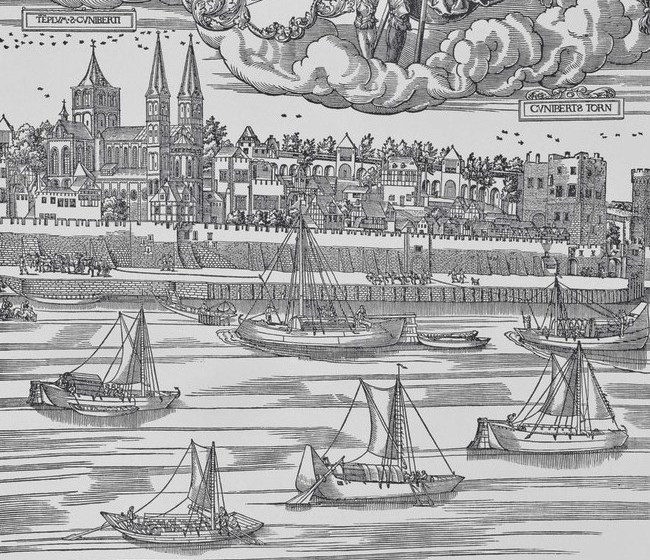 View of the Rhine river in Cologne (1531), with ships sailing downstream and being towed upstream.

Of course not each river was well suited for shipping. Natural obstacles existed in the form of seasonally changing waterlevels, drift ice in winter, and rapids. However, due to the limited size and draft of premodern vessels, many smaller rivers were used as well that are nowadays hard to imagine as major transport routes. On these smaller rivers, additional man-made obstacles came in the form of weirs constructed for fishing or for operating water mills. Technical solutions were made to circumvent these weirs by digging a small canal with a simple flash lock (Flutrinne) or by leaving a small opening in the weir that allowed vessels to pass, although these had to be unloaded first. One of the most famous of these installations was the Hamelner Loch (Hameln hole) in Hameln at the Weser river, which allowed the town to establish itself as a staple market. In many cases, however, rivers remained poorly navigable because of the many weirs.

In the 16th century, many efforts were undertaken to improve the navigability of especially smaller rivers. Locks were constructed to circumvent mill weirs or to maintain enough water depth, obstacles were removed and the river shores were cleared to facilitate towing. Examples are the Oker river by the duke of Brunswick in 1575-1577, which mainly served the transport of stones for the reconstruction of the ducal residence town Wolfenbüttel into an early modern fortress, the rivers Berkel (1591) and Oude IJssel (1592) in the eastern Netherlands, and the Fulda river by the landgrave of Hesse in 1601. Usually these projects were only successful for a couple of decades, and many of them dilapidated from neglect during the Thirty Years’ War.

Sure, GoogleMaps is cool but not half as cool as ORBIS. The Stanford Geospatial Network Model of the Roman World allows you to check travel times during Roman times. You can choose your mode of travel too! Source: http://orbis.stanford.edu

Working on this now for early modern Europe! Really excited about some of the preliminary designs- the goal will be to act and look a lot like Google maps https://twitter.com/NathenAmin/status/1539564839680475137

Someone needs to do a Google Maps, but for the past. For example, typing in "London to York" but you can select a period e.g. 1450s, and it would give you the likeliest route. That'd be great.

Discover the role and history of topographical views, maps and texts through over 800 examples from the British Library’s collections and beyond: https://www.bl.uk/picturing-places

Geografie in Movimento|Moving Geographies - ONLINE VIDEOS. The XXXIII Italian Geographic Congress is now fully accessible to the scientific community and the public. Have a look at the video recordings of over 150 conference reports! https://www.congressogeograficoitaliano2021.it/video-relazioni/