The nodes on our Viabundus map come in all shapes and sizes. Among the tiny ones are inns. They could be a single house in the middle of nowhere, and yet function as crucial elements in our road system. The presence of an inn along a road could determine whether it was still possible to continue the journey, even though the next town could not be reached before darkness, and thus influence travel time. However, the exact location and the history of inns are often hard to identify, and therefore we cannot claim to present a complete set at the end of the project. The end result we aim for will rather be a solid basis for further research, in which especially inns laying outside towns between 1350 and 1650 are incorporated as much as currently possible.

In April, I wrote a blog post about inns on the Dutch blog of my dissertation project ‘Mirror of mutual relations: communication between Hanseatic cities (ca 1450-1650)’, with examples related to the area central to this research: the region around the rivers Rhine, Meuse, Waal and IJssel. On my project blog, I share research results, interesting finds, and project-related activities. What follows is a translation of this blog post, showing why inns are fascinating places worth bearing in mind in different types of historical research. 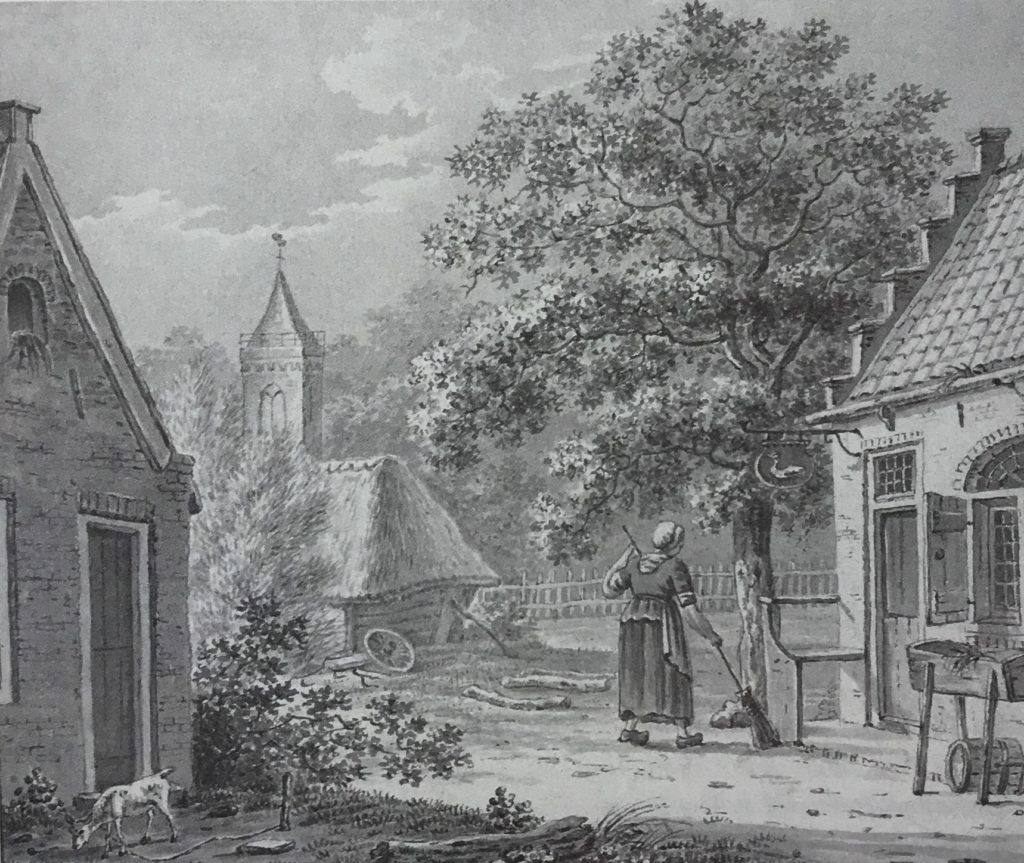 In one of my earliest blog posts about town accounts, I wondered where the inn In die kerck (‘In the church’) in the town of Roermond would have been located. Last month, I received an e-mail from Gerard van de Garde from Roermond: he knew its location!

In die kerck was a house mentioned as die Kyrch (‘the church’) along the Steenweg in 1556, in the archives of the ‘Hoofdgerecht Roermond’. In 1586 and 1591, the building is being named as die Kirckthor(e)n (‘the church tower’) in the same archive. In an urban fire in 1665, the place burned down.

Inns are exciting places, and not only because they served alcohol. In the fifteenth and sixteenth century, inns were important meeting places. 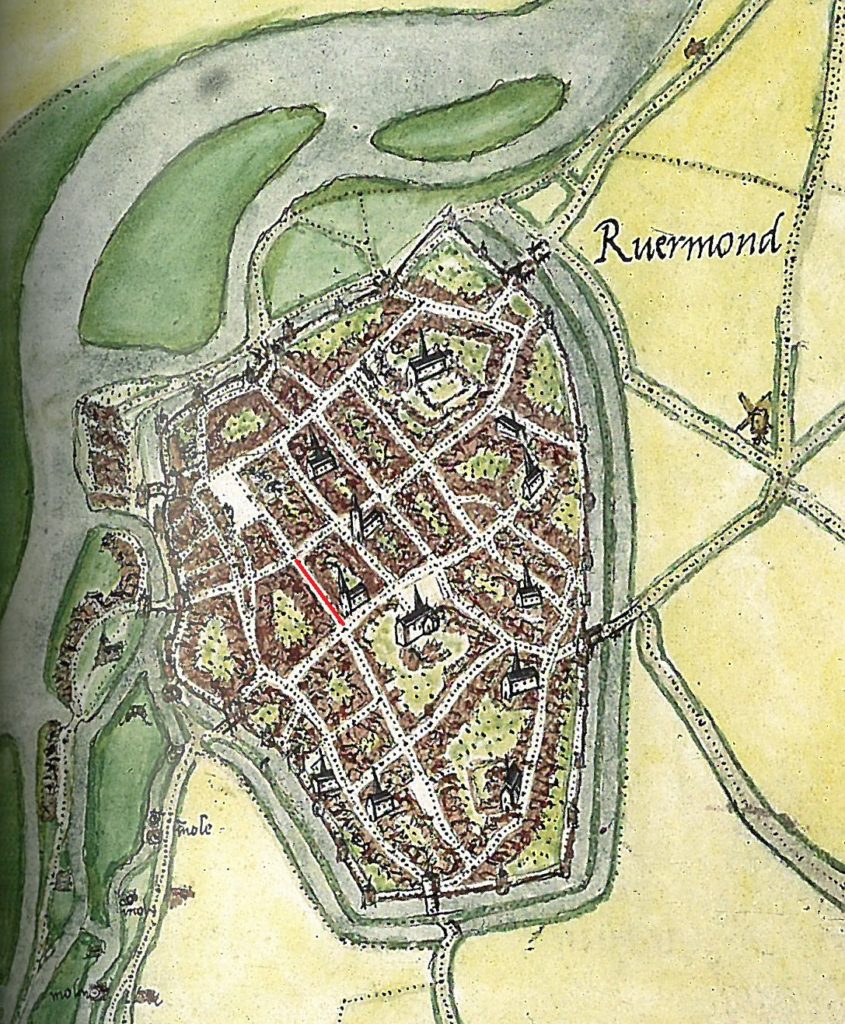 The Steenweg has been marked with a red line on this 16th century map of Roermond of Jacob van Deventer.
Meeting places
Inns regularly functioned as places where council members from different towns met each other to discuss political affairs. In die Kerck was, for example, the meeting point for a gathering of the councillors of Roermond and Venlo in 1559 in preparation for a Hanseatic Diet.

Envoys of different towns also regularly agreed on meeting each other on the way to a meeting, and travel together from a certain point onward. An inn on the route provided a convenient meeting point. In 1518, for example, the town council of Cologne proposed to the town council of Deventer to travel together from Deventer to the general Hanseatic Diet in Lübeck. In 1565, the town council of Arnhem informed the council of Nijmegen about the departure of the delegation to Leuven and Brussels: if envoys from Nijmegen were willing to travel along, they had to be in ‘t Roode Hert (‘in the Red Deer’) in Den Bosch on February 22nd. The advantages of travelling together were manifold: it was safer to travel in a group, and meanwhile, one could coordinate business related to the meeting. It could also be favourable if a group with similar interests arrived at their destination simultaneously.

There were cheaper and more expensive inns, but inns could also be real meeting places for people from different backgrounds. Next to the already named council members, one may think about travelling merchants, messengers, musicians, pilgrims, or soldiers. For messengers on the road for their town councils, inns could be real information hubs, offering information which could be important for their journey or for the town in general. Since they were regularly on the road, messengers were also often asked for directions by fellow travellers.

In Bruges, inn keepers maintained special relations with Hanseatic merchants. During their stay, Hanseatic merchants usually repeatedly resided with the same inn keeper. These inn keepers were not only their hosts, but were often also involved in the storage of their merchandise, acted as witnesses, warranted for a payment or vouched for the merchant’s reliability, and could act as his agent when the merchant had left town.

Nodes in the road network
Of course, one could find an inn in almost every town or village – often more than one – but inns were also typically located along main roads. These roads were important for long-distance traffic, and there was a good chance of attracting travellers looking for a place to spend the night. 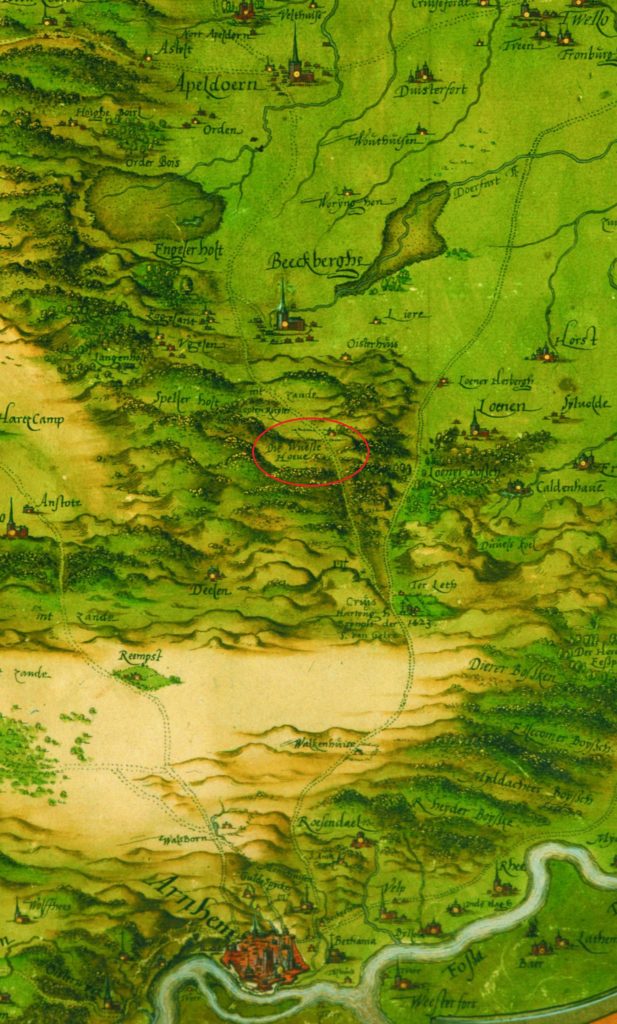 Inn De Woeste Hoeve on the road across the Veluwe between Beekbergen and Arnhem, map of Christiaan Sgrooten from 1570.
Just outside town gates one could often find an inn to spend the night when the town gates were already closed in the evening, or if the traveller planned to leave early before they opened in the morning. An example is the inn Het Houten Wambuis, located just outside the town gate of Zutphen to the road toward Emmerich (at least in the 18th century). In his sizeable book Reizen is tol betalen, Van Petersen mentions a bunch of inns one would pass along this road.

Inns could also be found ‘in the middle of nowhere’. Take Het Soerel, for example, on the Veluwe. This inn was located on a crossroads of two routes: the road between Zwolle and Amersfoort on the one hand, and the road between Arnhem and Elburg on the other. This inn was probably already in function at the beginning of the 15th century. Next to inn keeper, the owner was also a farmer, a common combination for inn keepers miles away from civilization.

The former location of Het Soerel on a map of the modern road network (OpenStreetMap). This map (which is still a concept version) has been established in the Viabundus project.
At the moment, several researchers across Europe cooperate in the project Viabundus to establish a map of on-going roads in Europe between ca. 1350 and 1650. The project aims to include inns located outside larger settlements as much as possible, because they functioned as nodes in long-distance traffic. Next to inns, there were other places to spend the night, of course. Cloisters, for example, or as a guest at someone’s house.

For all reasons mentioned above, inns are worth keeping in mind. They are much more than just a place to raise one’s glass and spend a night. Inns are significant nodes in relations between places and people, and this also holds true for communication between Hanse merchants and managers of Hanseatic towns. 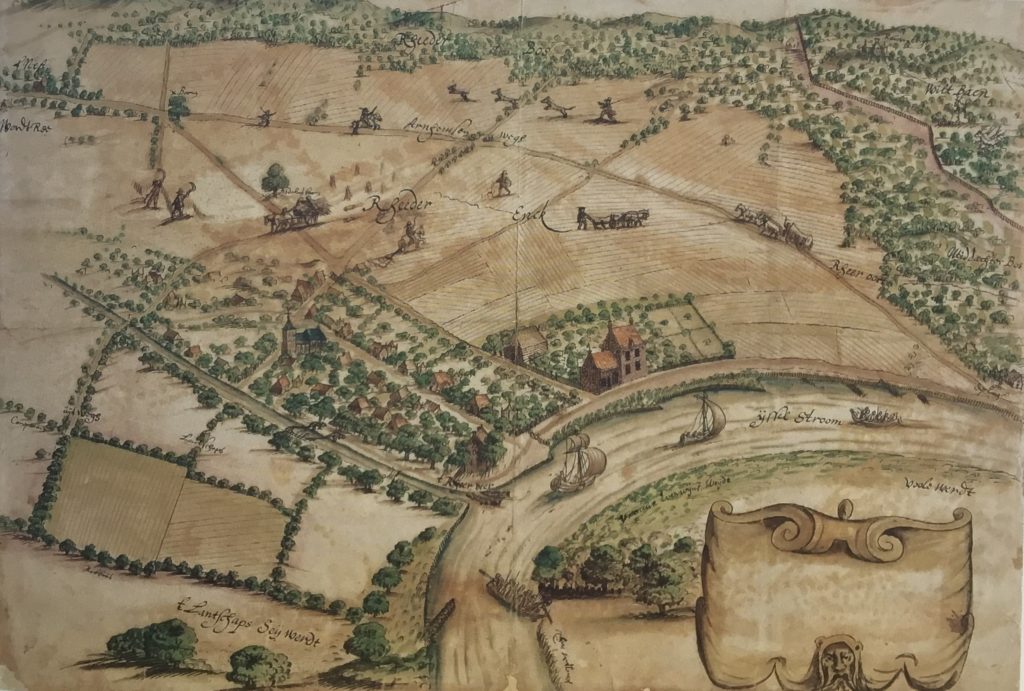 Had a zoom with a German colleague this afternoon. On very specific things regarding GIS etc.

I am overwhelmed how 2 years of covid made scientific collaboration with live talking and screensharing a natural & extremely rewarding part of serious academic work. #twitterhistorians

Today a 45 minutes public live presentation in Vantaa on late medieval migration. Next time I am speaking live in Antwerp on Saturday September the 3rd. With my colleaques and friends from @theroadsproject 😊 #ViabundusSuomi #ViabundusFinland #roads

#EAUHighlight S15 - On the Road
As economic and cultural centres, cities influenced traffic through time-space. How can we identify, reconstruct, map and analyse the premodern road network, and how can we capture the interrelationships within this network? 🗺️
@Muntera @tabularius

Viabundus is a freely accessible online street map of late medieval and early modern
northern Europe. On the occasion of the launch of version 1.2 @theroadsproject would like to get to know your ideas in 10 minute-presentations. Sign up before 9 September: https://www.universiteitleiden.nl/binaries/content/assets/customsites/medievistiek/viabundusapplied-callforpresentations.pdf